Time had long been crucial for history, religion, philosophy, travelling, art, business, the sciences, and everyday experience. However, the 19th century brought an essential change: vast local times became the subject of measurement and standardisation. The process concluded with the embodied idea of universal time: the same for all the inhabitants of the Earth.

A London conference in 1884 adopted a universal day of 24 hours beginning at Greenwich midnight. By about 1900, almost all countries had adopted a standard time zone. Some of them used an hourly offset from GMT. Despite “structural” decisions – the variety of local times was an important factor of the everyday experience of individuals and communities for many decades onward.

The idea of the conference focuses on time as an element of human experience, a category of culture and a tool used for designing and governing the lives of people and societies. Those themes also refer to broader reflection concentrated on the 19th century as the beginning of rapid globalisation – contrary to the typical focus on the development of nationalism separating societies and states in all possible dimensions: political, social, cultural ones.

We want to look at how people of the long 19th century and early 20th century tried to include, invent, and change time in different ways and with different tools: clocks, time zones, telegraphs, travelling, modern media, and how these mechanisms of measuring and controlling time gained importance for everyday life, public and cultural discourses, and political conflicts. Time measurements should serve as perfect focal points within and between communities.

The time went by – but loaded with many social functions and symbolic meanings. The power over it was technical; it created a mechanism of influencing the lifestyle of individuals and communities, effective leverage working for changing inherited from past feudal schemes of prestige and power, changing theatre of royal courts into a unified, standardised time of the working classes.

“As Time Goes by”? Time as a Category of Measurement, Transfer and Experience in 19th and early 20th century Europe

10.50-11.20 Sven-Oliver Mueller, Tuebingen University, An Improvement of Sea Power? The Change of Time and Travel in the Royal Navy in the 19th century

11.30-11.50 Erkjad Kajo, University of Pavia, From ‘orologio Italiano’ and ‘alla Turca’ time to ‘orologio Francese’ (alla Franca). The Battle for Time Standardization in 19th century Italy and the Ottoman Empire

15.30-15.50 Sascha Auerbach, University of Nottingham, Time, Plantations, and the Colonial State in the 19th century

Modern Temporality in the Critical Mirror of Indigenous Time

16.10-16.30 Katarzyna Czeczot, IBL PAN, The Time is out of Cosmic Joint? Recognitions on the Idea of the „Working Week”

17.00-17.20 Agata Koprowicz, IKP UW, Peasants and National History. Colonization of Time in the Polish Countryside in the 19th century

10.00-10.20 Per Rollandson, University of Nottingham, Time of the Foe. Representations of Antagonistic Simultaneities in Interwar Literary Journalism

12.40-13.00 Marcel Rotter, University of Mary Washington, Keeping Up with the Time(s). Urban Traffic Speed and Poster Design in 1920s Berlin

Conference organized by Institute of Polish Culture, University of Warsaw 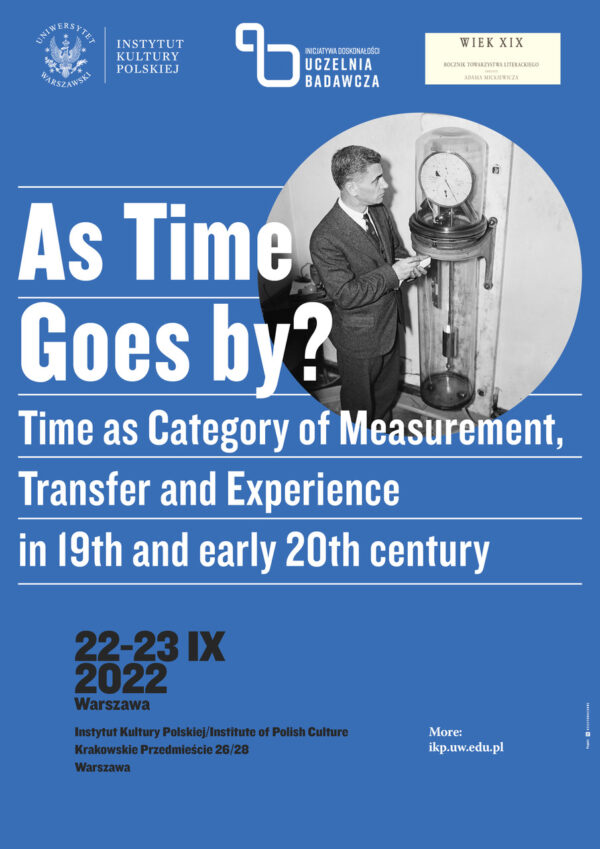